It was only three days after the killing of eight people in Atlanta, six of whom were Asian women, that I was announced as the new leader of The Collins Foundation. I had already been affected by the stories of brutal attacks of Asian people around the country, considering whether or not I should continue my early morning “power walk” and imagining what I might do if someone turned their racist violence on me, a person who to some, represented those who have been blamed for the pandemic (e.g., “Chinese” flu), for stealing American jobs (e.g., Vincent Chin), for being a danger to our country (e.g., interned Japanese Americans). So it was with some trepidation that I reviewed the press release for my appointment.

When Kendall asked me to contribute to this month’s newsletter, celebrating Asian and Pacific Islander Heritage Month by sharing my experience as an Asian American leader, a different kind of trepidation set in. Though I am Korean, my twin sister and I were adopted as infants by a White family, and like thousands of Korean adoptees in the U.S., I grew up absorbing all of the norms proscribed by the dominant culture here. During my childhood in rural Maryland and Eastern Oregon, the only time other Asian people were in close proximity was when a local family sponsored Vietnamese refugees who had two daughters near my age. Could I represent Asian Americans? 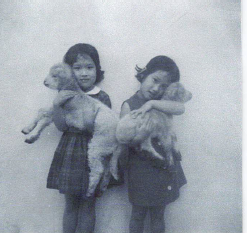 Carol (left) and her twin, Christine, at the farm with their lambs, Ginger and Mary Ann

In fact, it wasn’t until I left home as a young woman that I experienced living near or working with any other BIPOC communities. But what an experience! My first was working in the fields of a tree nursery with Mexican men who shared their stories, taught me tongue twisters in Spanish (but wouldn’t teach me curse words!), who worked from 7:00 am to 3:00 pm at the nursery and then worked in the evenings processing berries, and who ran for their lives during an ICE raid. Only then did I begin to question a system that benefited from the hard work of these men but hunted them like they were animals through those fields.

That experience opened my eyes to something much bigger than the interpersonal hurts of invisibilization, racial slurs, and assumptions based on how I look. It was the beginning of a journey to understand systemic oppression, to commit to working against it for the rest of my life, to understand that my own trajectory towards the position I now hold has been due, in part, to my ability to navigate dominant culture, and to find ways to use the positions I’ve held to support and strengthen the lives and work of others. That journey has given me the opportunity to support Spanish speaking survivors of domestic violence, to drive state funds to increase cancer screening in Tribal communities, to sit in one of the back offices of the Black United Fund to support emerging Black-led organizations, to help build the capacity of numerous immigrant and refugee organizations, to travel to Oregon’s rural communities to teach effective leadership and collaboration, and to work with community partners to advance equitable legislation and administrative policy in Salem.

Dominant culture insists that we lift up and celebrate “heroic” leaders – literature and popular media are filled with them. But I am only where I am today because I’ve learned from and worked in partnership with many amazing people supporting their communities and changing systems: work colleagues, community advocates, service providers, older mentors and young people I have mentored, and the Mexican guys I worked with so many years ago.

I don’t see myself as an heroic leader or even the smartest person in the room. This is not false humility. I know what I’m good at: building bridges between people who want something better for their communities but coming at it differently; offering what I do know to support that work; considering critical feedback as a gift, admitting when I’m wrong and apologizing; and listening for truths in diverse perspectives. And I recognize that representation is important – seeing Asian American people in leadership positions is something I never saw when I was growing up. I do hope my presence brings hope to other Asian Americans. The leadership imperative I set for myself is to utilize the position I hold to continue to learn from and lift up others, build bridges between communities to address systemic oppression in all the ways it shows up, and support and strengthen the heroic work of people all over Oregon. That’s the kind of representative I am not afraid to be.