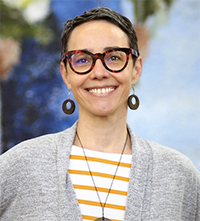 I started writing this piece in hopes of highlighting the vibrancy, resiliency, and rich diversity of my Latinx community.

My research began by googling “Latinos in the U.S.” Instead of greatness, however, I was slapped with thousands of articles and reports painting a bleak picture of our community: Latinxs are less likely than non-Hispanic Whites to be homeowners, to graduate high school, to have generational wealth, or to have college and professional degrees; we are more likely to be profiled by police, to work in low-wage jobs, and to have high incidences of unwanted pregnancies, diabetes and heart disease; and so on.

Finding any evidence of our excellence, our contributions, our gifts turned out to be more more difficult than I thought. But I’m not surprised, as it only confirmed what I learned the minute I landed in the U.S. 26 years ago: the predominant colonial and American narratives—the ones everyone believes and we Latinxs, foreign and domestic, often internalize—is that there’s something wrong with our culture, our language, and traditions—with us as a people. It takes significant effort to ignore the persistent and pervasive story that our community is always in need but has nothing to offer. Even if we instinctively know better, the script that our collective history is one of deficiency, poverty and hardship is difficult—if not impossible—to flip. In the eyes of White America, it would seem, our pain (and the pain other communities of color suffer daily) is our only defining characteristic.

Reframing this narrative has too often led us to tie our worth to our economic contributions, such as:

But Latinxs are not just good for America’s economy—we have contributed to its activism, its food traditions, its politics and everything in between. Where would the U.S. be without Alexandria Ocasio-Cortez or Sonia Sotomayor, Sylvia Rivera or Jean-Michelle Basquiat, Cristina Martínez or Tab Ramos? What would America be without Latinx culture, art, music, or dance?

In Oregon, Latinx leaders were directly responsible for—among thousands of other successful programs, organizations, and initiatives—the creation of one of the largest COVID relief fund for undocumented workers in the nation, proof that when they are trusted and resourced adequately, they can do amazing things. Here are a few of the emerging and established community organizers you should know about and invest in:

I encourage you to fund them and their organizations often and generously. I also encourage you to challenge yourself to remain curious and reframe what you think you know about Latinxs in Oregon and beyond—yes, we’ll need support to upend the systems of injustice and oppression that have kept us from succeeding in many areas, but make no mistake: we are also gifted, resilient, creative, and hardworking. As our numbers grow, our fight for our community and our collective liberation will also intensify—we hope you’ll be a part of it.