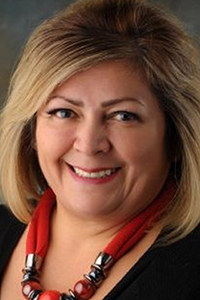 It was 1985, during Ronald Reagan’s second term as president, when I set foot in the United States for the first time at 18 years old. I didn’t know what destiny held in store for me, but I was full of hope at being able to move forward.

My path was difficult, and I lived through very intense experiences. When one arrives from another country, it’s difficult to find your place, where you belong, while at the same time being exposed to a new culture, language and society. Some experiences make you stronger, while others make you question who you are. At 19 years old, I was homeless, working in the fields, a single mother and domestic violence survivor.

In 1986, and thanks to Ronald Reagan, we undocumented individuals were blessed with the Simpson-Mazzoli Act, which helped to achieve immigration reform for families and farmworkers. How can you talk about your rights if no one sees you or if you’re invisible to the outside world? I started to get involved in immigration and social justice issues and gain political awareness, and learning the English language made me realize the magnitude of the problems surrounding our rural and farmworkers, and communities of color in general. In 1994, I was invited to participate as a volunteer at a local clinic, and I fell in love with what I see to be my path, my passion and my life: Working with the poorest populations that are invisible even to the government eye.

That passion led me to accept a number of leadership positions in Latinx-focused organizations. I consider it a long path of learning, and today I work for The Ford Family Foundation as a field coordinator, a position I feel fits me to a T. As one of six field coordinators serving rural communities in Oregon and Siskiyou County, California, I listen to communities and visit with residents and leaders to understand their struggles and context. My job is to follow their energy toward the changes they would like to see. Because of my background and expertise, I work with Spanish-speaking communities across the state, those who have been marginalized and underrepresented.

I was very fortunate in 1994 to find my first mentor outside my family, a Latina woman who was already a leader in Woodburn. We were the first Latinas to receive many certifications that helped to bring information to the fields and labor camps, where the temporary farmworkers live and work. These certifications included HIV-AIDS prevention training, instruction in the proper use of clothing for farmworkers after exposure to pesticides, and certification for Vaccines.

In 1999, I began working at the Farmworker Housing Development Corp. (FHDC) in Woodburn, where I stayed for 12 years, with my final position as director of Community Leadership Development. While at FHDC, I helped unify the entire portfolio of housing with education programs from Woodburn to Independence. Other highlights of my time there were helping local leaders become a part of the team and working with the after school and summer enrichment programs. We attracted hundreds of volunteers who provided classroom support, financial support for summer camp, and activities for our enrichment programs. With all these efforts, 99% of the children in these housing portfolios graduated from high school. It wasn’t just the program that helped them, but having a safe environment and roof over their heads, a sense of belonging and learning why we’re here, why we immigrated.

At the end of 2010, I became the interim director of a program called CAPACES [Capable], a network of organizations serving the mid-Willamette Valley Latino community and its allies. After helping organize it as a non-profit, I was named executive director in 2011.

In 2016 I was appointed to the Woodburn School District Board, and I accepted the new position with The Ford Family Foundation while running for my school board seat in 2017, a year marked by a new president and a polarized community. Unlike Reagan’s presidency when I first came to the United States, this presidency did not offer hope of immigration reform, instead BIPOC (Black Indigenous People of Color) communities were alienated and criminalized.

My work at the Foundation for the last three and a half years has been amazing. I get invited into the most vulnerable communities to work with residents on projects that are important to the BIPOC residents. We work on capacity building, on building public speaking and other skills so residents can present before a school board or city council. We formed the first Spanish-speaking working group, Fortaleza, through the Ford Institute for Community Building. This working group helps guide a wide variety of the Foundation’s work in Latinx/Spanish-speaking communities. Fortaleza subgroups were able to craft pandemic-related fliers and messages catering to their communities as well as working on community specific wildfire issues.

By creating a safe environment and implementing capacity building (never called leadership development), we can then create a pathway toward becoming a good neighbor to then become a community leader. Our Embracing Communities Conference was an outcome of the groups I’ve been working with in different areas of the state. It’s an annual conference for grassroots leaders who may not belong to an official organization. Our Good Neighbors trainings go into Spanish-speaking communities to encourage residents to become involved. In many of their home countries, leaders are looked at as troublemakers and many times killed. A safe environment is essential, so these individuals can see themselves as leaders later in their Life.

We have also developed a promotora curriculum for residents’ services, with an eye to economic development. We are working to help promotoras (Latinx community members who receive specialized training) move from farmworking into an office setting where they can help others.

With the experience I’ve acquired in the last 25 years, I can understand the barriers faced by the Latinx community and offer my humble opinion and support. This position feels like “coming full circle,” beginning with when I was offered a position at the local clinic, where they helped me find my pathway and where I found my niche, and ending with serving the community where I’m from.

My hope is to create opportunities for members of marginalized communities – people like me – that get overlooked due to accent, or skin color, or many more barriers. Someone had the guts to create an opportunity for me, and I hope I can do the same for many more people.