Reflecting on My Experience: In and Out of philanthropy 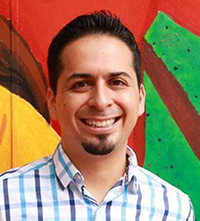 As someone that grew up in extreme poverty, I often get asked what it’s like to be an insider in the world of philanthropy. I’m still trying to figure it out. I guess you can say, I’m in-between—a space I’m very familiar with as an immigrant in this land. So, in the spirit of celebrating our comunidades vast heritage, here is my best attempt to describe my experience so far in—and out of philanthropy.

Go, go, go—vamos! Whether it was dropping corn seeds as my abuelo’s plowed the land in my homeland, crossing the border to a place where the impossible seem possible, having to pick una mas—one more bucket—in the scorching hot blueberry fields to make ends meet, racing in my mind to catch-up to what my English-only teacher was saying—then professors at Willamette University, or hustling to meet another grant deadline when I joined the non-profit sprint 16 years ago—it’s always been go time for me. It’s what I and many others have had to do to survive despite being surrounded by abundance.

I still remember vividly that time I set foot at the Willamette University campus and learned about the Collins family. It was impossible not to. Their name was in the buildings I bussed tables in (my first job after I got my papers) and the ones I aspired to be in, and eventually was. I guess it was possible. But, never in my wildest imaginations did I think I would be working alongside the Collins family for the common good of Oregon. Especially, after joining the non- profit sector and having to write grants to dance to the tune of philanthropy.

When I became a Trustee at the Collins Foundation in 2019, I couldn’t believe it. ‘What am I doing here! What the heck are Equity Markets (and not the kind of equity we commonly hear about)?!’ Here I was making decisions about where money should go, and at the same time, in a very different space, I was the one asking. And, even though I have climbed the economic ladder (unfortunately a much smaller ladder in the non-profit sector) and no longer live in emergency time—everything around me is still on go time—because working with our comunidades is like trying to build in earthquake mode—all the time!

As I sat in the initial trustee meetings, these emotions were wreaking havoc inside me. I felt like I was going to explode. ‘I gotta keep it together. Focus!’ —I’d tell myself. I would let it all out on my way back home, my other reality.

Nearly three years now in the world of philanthropy, I do believe there’s a transformative shift happening inside and out. The insider world seems to be shrinking and wealth is being redefined. We just need to continue to let go and let the opportunity communities we support guide us. Let’s talk about it together. Gotta go now!

Thank you. Jaime Arredondo—he, him, el